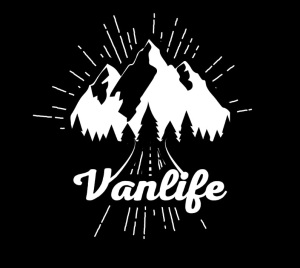 I’ve bought an old Ford Transit campervan off Ebay for just £700, similar style to the Red Ford Transit Smiley minibus I converted and went around Europe in last year. I simply bought this camper van to update and upgrade to sell on again to raise some more funds.
When I bought it I knew it needed welding and some work to pass an MOT. Once again I asked my friends Dave and Chris to do the welding and the best course of action was to put it through an MOT and see what it failed on. 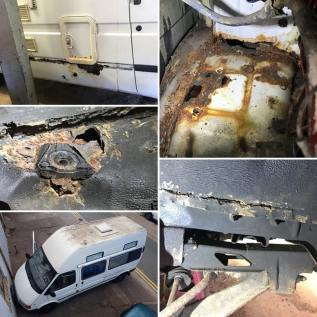 The next day…..it FAILED, and badly ha ha, only 3 pages of failures from welding points needed in 8 areas, all brakes, suspension and lots more. I set Dave and Chris to do the work and even at mates rates it cost me £1300 for all the parts and work needed to pass it’s MOT. 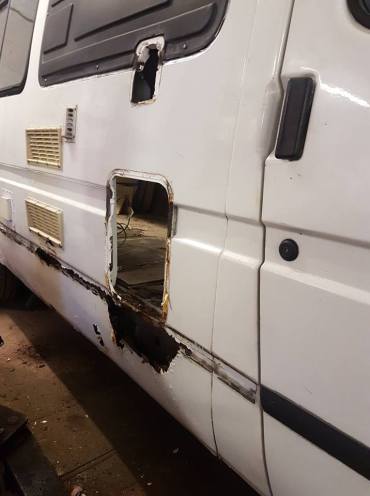 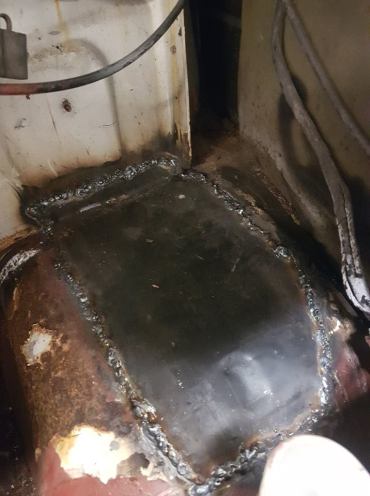 After getting the van back from the garage I had to put in storage as my work posted me in Cardiff for just over a month. It’s difficult to work on a project while working on the road, and living in a van, and the only place to do the work is my mums house because I have rented mine out still.
I started work on the roof as it was leaking and it also needed re painting. I jet washed as much dirt as I could, re sealed the roof skylight and then painted the whole top with a plastic paint (the same used on my luton van)
Next was to start filling the bits that had been welded by Chris, he did a great job grinding the weld down but it was never going to be smooth enough to just paint over, so I used fibre glass and normal filler to start with and sanded down, then applied a finish filler which was smoother and sanded down well. All that was needed after that was to paint with a quality metal black paint as this is part of the design I wanted for the camper van. 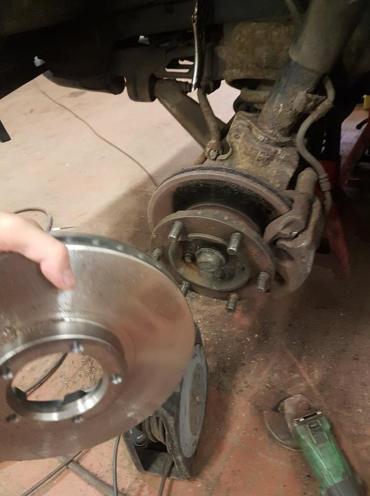 The weekend after I started to rip out the old units. Some of these were already taken out so Chris could carry out the welding jobs safely and reduce the risk of fire to the van. I then started to build the right side of inside the van and placed more insulation in the walls, re-plywood areas needed and glued a fabric liner on the walls and around the windows (tricky job).
I then built the frames for the 2 seats which would double as 2 single beds, or a double if needed.
I repaired the floor that was ripped out for the welding work to take place, I also replaced the plywood on the left side of the van which was behind the fridge and toilet.
As the weather wasn’t getting any better I needed to start thinking about getting the outside of the van finished too. I resealed the skylight which was leaking and this needed doing before I lined the ceiling with the carpet and install the LED spotlights. While I sealed the roof I also sealed the edge where the roof meets the main boy of the van.
I then worked on the rear doors as these were quite badly rusted before and I did treat the rust and remove what I could, however, I still needed to fill the massive holes and gaps with fibreglass and then body filler once this was dry. I then needed to sand this down smooth before re painting the doors. 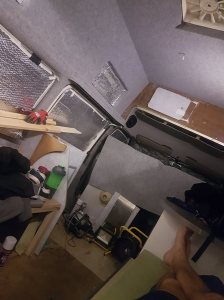 I did start doing this work on the camper on my weekend when I returned back to Hull after working away during the week, but because I wanted to speed things up a bit I ended up taxing the van and getting insurance so I could take this to Derby and work on it between my working shifts. This also meant I had to sleep in this unconverted van which was cold on evenings with no heater, all I had was a good sleeping bag and a hot water bottle which I filled up after I finished work.
The story continues……. until next time.

Who said life on the road was boring? Not a chance when you pull over to take photos like this on the side of the road 😜🌄👍🏴󠁧󠁢󠁳󠁣󠁴󠁿 . #vanlife #lifeontheroad #skyporn #sunset