I’ve been reading a book called “The Best Beers In The World, by Mark Dredge” and since I’m a beer lover I decided to visit some of the bars around Europe mentioned in the book…..starting with Berlin.
I’m sat in Eschenbrau bar in an area called Wedding in Berlin drinking a Dunkel beer (0.5l for just 3.30 euros) brewed by themselves. 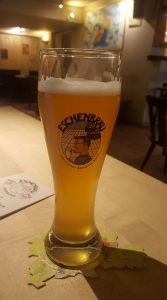 They brew 16 of their own brew and serve 5 of them at any one time, I recommend this place a
visit but it’s hard to locate as it’s set in between apartment blocks and have to walk downstairs to the bar as the brewing room is at the normal level.
While I’ve been sat here two people have come in and ask the staff to fill up their bottles to take away…..must be very popular with the locals too.
I’ve returned and updated this post since I wrote about the beers in Berlin. I have now tried ones in Poland, Czech Republic, and Austria. Poland and Czech Republic prices were a lot cheaper because they still have their own currency, a good 0.5l beer costing between £1-£1.50. I visited some bars in Prague from the book and I was very impressed with the quality of beers for the price and it goes to show how much tax places that have the Euro as their currency. Even in England, a pint of Kozel from the Czech Republic costs between £3-£4 where in Czech Republic it cost just £1, yes I understand the import cost etc but most is a tax from the government.
What I really like about drinking beers in Europe compared to the UK is a lot of places brew their own beers on site (Yes some do in the UK but you don’t see a lot of it), also in the UK a lot of pubs and bars have last orders and stop serving at 11pm….in mainland Europe this doesn’t happen…last few nights I’ve been staying in my van near a little local bar and they kept serving until 2am….basically when the locals finished. Locals like to have a quiet drink with some food and a laugh with friends, little music in the background and socialise, and this is every night of the week. I really like this style compared to having a massive night on a Saturday, loud music unable to hear your friends while trying to catch up….that’s what nightclubs are for.

An even better way to enjoy a nice beer is buying case of beers, bring them back to the van, invite friends, find a nice spot in the forest or beach, campfire and enjoy…..watch this space when I arrive in Croatia where we will be organising a cool relaxed after beach party at Sonus Festival in August 🙂