Saturday 27th May – The Stag Do. Today was the day the lads was driving from the UK and all meeting at a campsite (La Parc De Gue in a little village called Montigny-Sur-Loing), a great little site with showers, site next to a lake and even a pool to use. Me and Matt took the vans mid-day to meet the guys at the campsite but they were running late as they got up at 3am in the UK so needed to stop a few times. We met them at 2pm and was given a nice site towards the back near the lake. 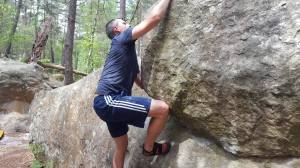 We set up camp and then headed out for a small bouldering session, some of us hadn’t done it before so it was a good starting session.  After the session, we had a BBQ but the lads who travelled were really tired so they didn’t stay up long. 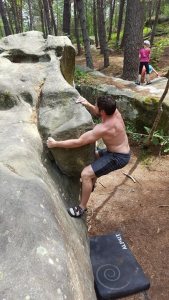 Sunday 28th May – We got up, did a run to the shops for Pain De Chocolats and I made the morning brews. Once ready we headed out to another set of boulders to try as everyone was recharged from a good sleep once the ducks on the lake stopped attacking each other (sounded like that). Once we finished bouldering we went back and had showers, and decided whether to get pizzas to the campsite or go into Fontainebleau for meal and drinks for Steve’s stag do…the pizza place was closed so we got ready and headed into town for the night…… great night but don’t remember much other than been rubbish at pool…again.

Monday 29th May – It took a while for people to rise from their pits but we all got up finally by about 10am. For some reason I woke up early and didn’t feel too bad, I washed my clothes and pegged them out before people got up. I then put the kettle on for everyone. Some of the lads were going back to the UK today so they packed up their tents and we managed to go bouldering at a place called Elephant for an hour before heading off from there. Matt was also leaving this day as he had a ferry from Bruges the next day to Hull and he didn’t fancy driving 6-7 hours in one day. I thanked him for guiding me for my first week and his support and said our goodbye’s. 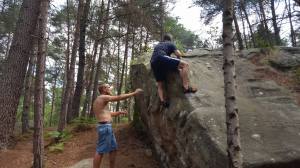 Myself, Steve, Ben and Nik was staying another night so we went to get some more BBQ stuff and enjoyed a chilled night with food and drinks (and the odd bite from the Mosquito’s)

The sunset last night was pretty amazing. 🌅 Been in the van "my home" gives that flexibility and off grid lifestyle. 🚐 Seen lots of vanners this week been asked to go Home, when some dont have a home to go to. Surely its safer out in the countryside where no one is around to pass or catch the virus. 🩺🧫 . Stay safe everyone. . #stayathome #covid19 #staysafe #vanlife #home #vanbuild #sunset #campervan #travel #stayathome #homeiswhereyouparkit #explore #diycamper #countryside